Some projects are years in the planning, others have an almost serendipitous quality where everything almost falls into place. This project about a  woman named Mary O'Shea definitely fell into the latter category.

tion (ICA). The guild decided to publish a book marking this anniversary. The daughters of one of the former guild presidents attended the launch and presented the members with a collection of material she had kept from her presidency during the 1960's. Amongst this collection was a scrap book containing material from 1966, the 50th anniversary of the 1916 Rising. They had held a poetry competition at the time. Along with the poems was a hand written memoir of the events of the Rising. This had been written by Mary O'Shea a woman who had been a trainee midwife in the Rotunda Hospital at the time.

The discovery of the document coincided with the announcement of funding for commemorative projects of the 1916 Rising. An application was made to Laois County Council to fund a short documentary. The initial scope of the documentary was very simple, to use a voice over and historic photographs to illustrate the story but this would change. We already knew that the voice of a working woman, not involved in the politics of the times, was rare. We didn't realise it was probably unique. A full account of Mary's story can be found on the Abbeyleix Heritage website.

Through the production of the film we were contacted firstly by the co-ordinator of the Mná 1916 – Women 1916 who was intrigued by this apolitical and innocent account of the Rising. This lead in turn to coverage of the story in nation newspapers including the Irish Times and then by the director of the Rotunda, Birth of a Nation exhibition. Through this interest we were lucky enough to be granted access to the Rotunda Hospital to carry out some filming and to given additional funding to carry out this additional work. 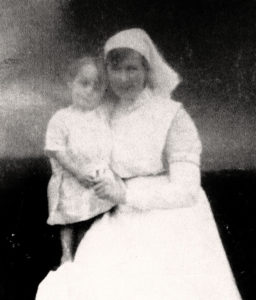 We now had a decision to make. What direction to take the film, would we stick to the original documentary format or change to a docu-drama or even go down the route of a full drama. We carefully weighed the options and decided that our original idea was still the best. We felt that any dramatic retelling of the story would be severely curtailed by our limited, though expanded, budget and that, given the importance of the story, we should make the film of as high quality as possible. This meant keeping the film as simple as possible.

To make the film we decided to use a local voice to tell the story rather than employing a professional voice-over artist. We recorded the voice-over on site rather than bringing her to a studio, this made the recording session more comfortable and gives it the feel of being recorded as almost a fireside chat rather than a staid and stilted recording as can so often happen. We also found local musicians to create the score from two traditional pieces and one original composition.

Filming was carried out over two days, primarily in the Rotunda Hospital with additional footage shot in Malahide. As the Rotunda buildings have been hugely modified and modernised over the intervening century and our limited budget, we decided to use evocative and emotive artistic shots rather than trying to recreate the look of the building as it would have been at the time of the Rising. This involved filming details of rooms and buildings rather than giving a full view, showing shadows and silhouettes rather than people in detail, and using focus to create dream like qualities.

The finished film can be viewed below, we hope you like it.

Funded by Laois County Council through the 1916 Community Grants Scheme